Many RNAs in nature have undergone post-transcriptional modifications, which play an important role in the structure, function, and metabolism of RNA. More than 170 types of RNA modifications have been discovered, among which pseudouridine modification is the earliest and most abundant RNA modification, so it is also called the "fifth base". Pseudouridine is the 5-position ribose isomer of uridine (see figure 1), which is widely present in a variety of RNAs (tRNA, rRNA, snRNA, snoRNA, etc.). Pseudouracil modification generally results from the isomerization of uridine. With the development of sequencing technology in recent years, it has been found that there are abundant pseudouridine modifications on mRNA. Pseudouridine is a natural structural analogue of uridine. Compared with uridine, ribose is not connected to uracil N1, but to C5 of the pyrimidine ring. The isomerization of pseudouridine does not affect the classic base pairing, but it turns the N1 position into a proton donor. This may be because pseudouridine has different characteristics from other bases and can make many RNA structures stable. 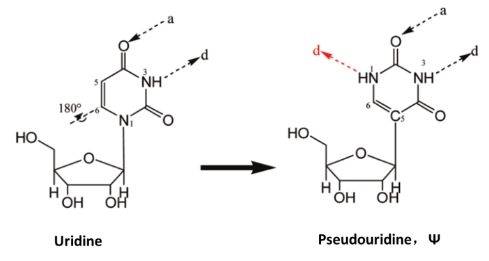 When synthesizing RNA in vitro, use 5-methylcytidine instead of cytidine and pseudouridine instead of uridine to modify the bases of RNA, and then add interferon inhibitors to the cell culture medium. These measures can limit the activation of the host cell's innate immune system by exogenous nucleic acid, and make the exogenous nucleic acid play a corresponding role in the cell. When the mRNA vaccine is injected into the human body, the human body's immune response to the mRNA vaccine is mainly related to uridine (partly composed of uracil). Using pseudouracil instead of uracil can reduce the immune system's recognition of mRNA. mRNA vaccine manufacturers Moderna and BioNTech both use pseudouracil modification to maintain mRNA stability. Pseudouridine has been widely used in the production of mRNA drugs. ψ-seq can locate the modification sites of pseudouracil with single nucleotide accuracy. However, the exploration of mRNA modification sites has just begun, and the limitations of detection technology still need to be broken through.