Ribonucleotides are important macromolecules in organisms, as well as carriers of genetic information of cells, some viruses, and viroids. RNA can be divided into many types according to its function, mainly including the following types: mRNA, tRNA, rRNA, miRNA, snRNA, etc. For RNA with DNA coding, the work in the cell can be completed by the production of the protein it carries. Under the premise that the actual genetic sequence does not change, the change of gene expression will be affected by the chemical modification of RNA. This kind of epigenetic modification affects the biological processes of many organisms. In 1951, in-depth research was carried out in the field of RNA modification. With the continuous discovery of RNA modification research, RNA plays an important role in regulating the body. RNA modification plays an important role in the occurrence and development of life activities and diseases. Many RNAs in nature have undergone post-transcriptional modifications. These post-transcriptional modifications play an important role in the structure, function, and metabolism of RNA. So far, more than 180 different types of RNA modifications have been identified. These RNA modifications exist in the RNA of most cells in the three major areas of life (see Figure 1). Generally, the use of RNA modification is mainly used to expand the chemical and topological properties of the four basic nucleotides, thereby affecting the biogenesis, stability, kinetics and function of the RNA/RNP carrying them. 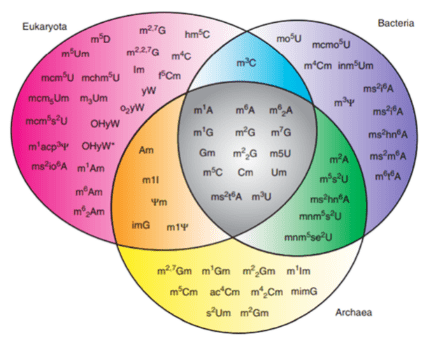 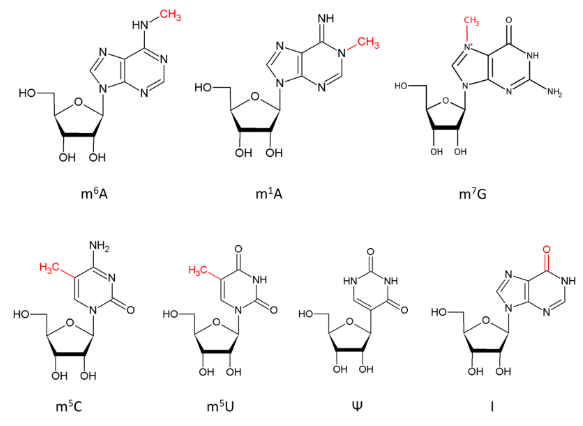 Unlike m6A, m1A modification occurs on the first N atom of the adenine base group, and it has a positive charge under physiological conditions. m1A was first found in non-coding RNAs such as rRNA and tRNA, and it is widely present in prokaryotic and various eukaryotic mRNAs.

The discovery of m5C modification in mRNA also has a history of more than 40 years. The distribution and function of m5C may be species and tissue cell specific. The role and metabolic pathways of m5C in eukaryotic mRNA are not fully understood. Researchers have found its derivatives hm5C and fm5C in the RNA of Drosophila and mammalian cells and brain tissue, indicating that m5C is a highly dynamic and modified form with potential regulatory function.

ψ is one of the most abundant forms of post-transcriptional modification in RNA. It is widely present in cellular RNA and is highly conserved among species. Since ψ is formed by the sequence-specific isomerization of uracil (U), this modification is abundant in tRNA and rRNA. ψ can change the characteristics of base complementary pairing so that it not only affects the structure of rRNA, but also affects mRNA coding, indicating that it may be a potential regulatory element involved in post-transcriptional regulation.

Adenine-hypoxanthine (A-I) is the most common form of RNA editing in mammalian mRNA, and it mainly occurs in the double-stranded structure region of RNA. Adenosine deaminase (ADAR) can deaminate the adenosine on double-stranded RNA to produce I. Since I is paired with C during base pairing, the nucleotide A to G is converted, which may lead to a series of functional changes.

The role of RNA modification

In vitro, various types of chemical modification of RNA can improve the thermodynamics and nuclease stability of RNA, increase their half-life in the body, improve biodistribution and pharmacokinetic properties, improve binding affinity to the target, improve specificity, and reduce off-target effects and other effects. In organisms, there are many types of RNA modifications of mRNA, which exist in various regions of the transcript. For example, m6A exists in 5'UTR, CDS (coding region), 3'UTR and introns of precursor mRNA, and some non-coding RNA and miRNA. These modifications can be used to identify the start position of the transcript. In addition, in the normal RNA processing process, the cap structure added to the 5'end of the mRNA through the capping process has a very important regulatory effect on gene expression, transcript stability, etc., and is the translation of eukaryotic mRNA into protein and a key stabilizing factor. In short, the 5'end methylation modification of these mRNAs is very important for mRNA stability, translation initiation and gene expression. In addition to being vital to the cell's own translation process, tRNA methylation modification can also perform a variety of other functions. It serves as a primer for retroviral reverse transcriptase and participates in processes such as DNA damage repair, stress response, and gene transcription. rRNA methylation modification has potential regulatory effects on mRNA translation, mitochondrial transcription, and bacterial drug resistance mechanisms. The methylation modification on other small RNAs increases the stability of the RNA and also participates in the RNA repair process. ψ is one of the most abundant forms of post-transcriptional modification in RNA. It is widely present in cellular RNA and is highly conserved among species. This modification is abundant in tRNA and rRNA. ψ can change the characteristics of base complementary pairing so that it not only affects the structure of rRNA, but also affects mRNA coding, indicating that it may be a potential regulatory element involved in post-transcriptional regulation.